From a helicopter, Christoph Gielen has documented the aerial configurations of suburbia, highways, and construction sites. Symmetrical and homogenous, curvilinear symmetry and geometric blocks are Gielen’s play to render new morphologies of human settlements. Likening our cities and suburbs to computer chips and spider webs, Gielen’s perspective of the built environment is not intended to be sentimental or romantic. As a reflection of our social world, each image expresses the totalizing nature of endless homogeneity lacking organicism and spontaneity. Yet purely by their geometric abstraction, these photographs are as optically pleasing to the eye as decorative motifs. In this relationship between spatial and social developments, Gielen presents a critical gaze, one which renders the human landscape into static codes. 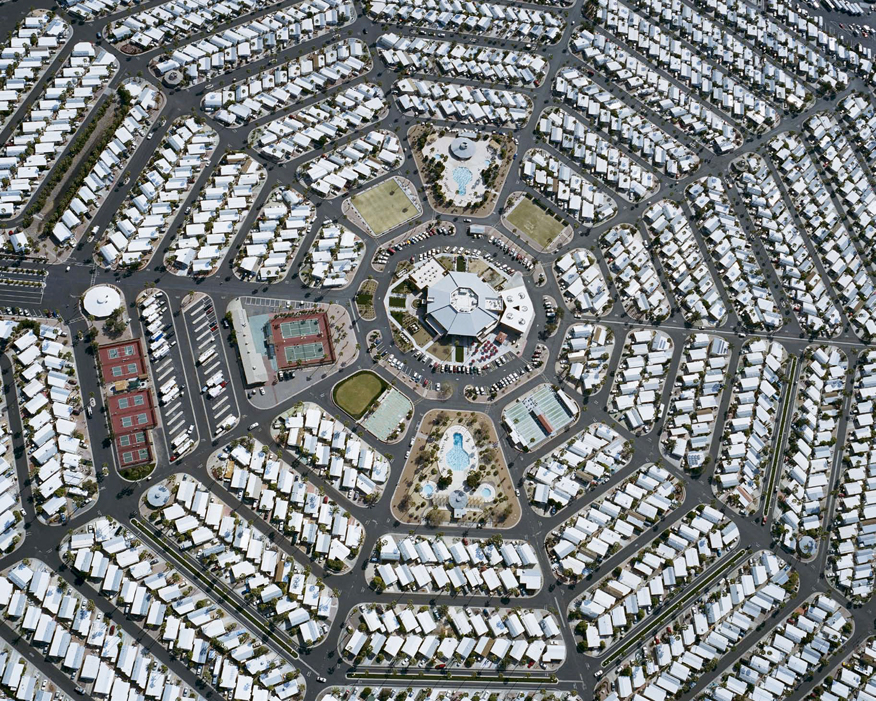 As an aesthetic and social inquiry, these photographs elicit modern analogies to describe the politics of our living environments and raise question to the manner they emanate power and order through built structures. From his macroscopic vantage point, these topological forms are rendered like decorative motifs which perpetually repeat outward. The abstraction of Gielen’s angle resonates with fractal geometry as a perspective shared with telescopes and microscopes in which structures from afar and in close detail share the same essential pattern. Though beautiful in its symmetry and abstraction, these sprawling patterns evoke a mathematical or economic view of society. As a result, Gielen’s perspective distances rather than humanize the subject as “the landscape’s aesthetics, or lack thereof, become economic calculations” (Manaugh, “Ciphers“). 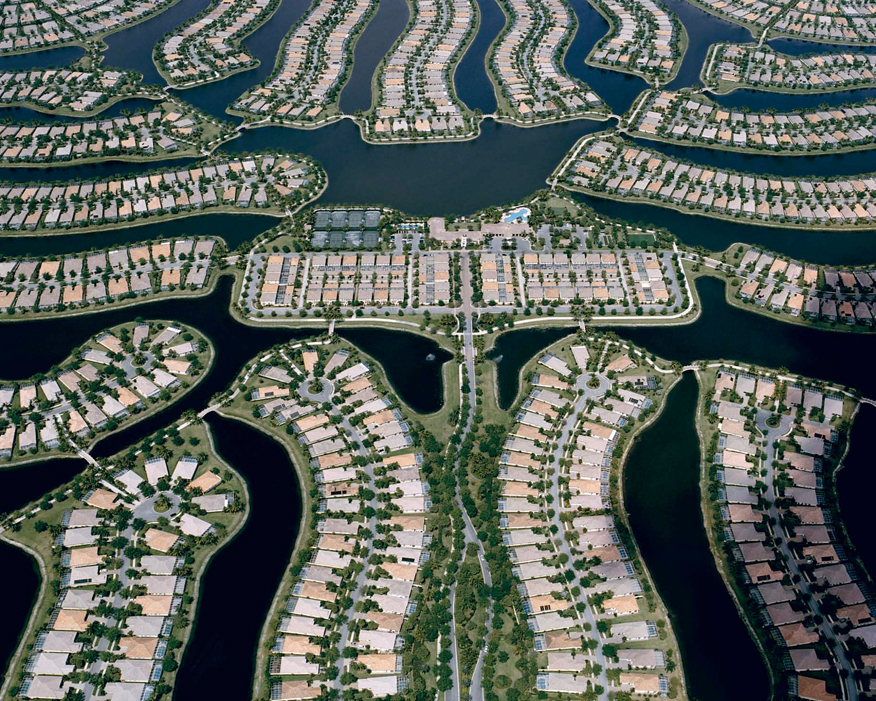 By measuring the landscape into a pictorial map, Gielen’s angle also resonates with cartography: the science of projecting the curved surface of the earth onto flat media. Like maps, a primary and constantly evolving means by which knowledge of the environment is structured and organized, the elevation of Gielen’s angle is used to offer a critical view into the shape of our social world. In codifying residential culture, Gielen presents a relationship between nature and society which transforms the landscape into hieroglyphic messages on the connection between social and geometric structure. Encouraging viewers to question development, Gielen critically renders these settlements into blueprints to change the organizing patterns of a culture. 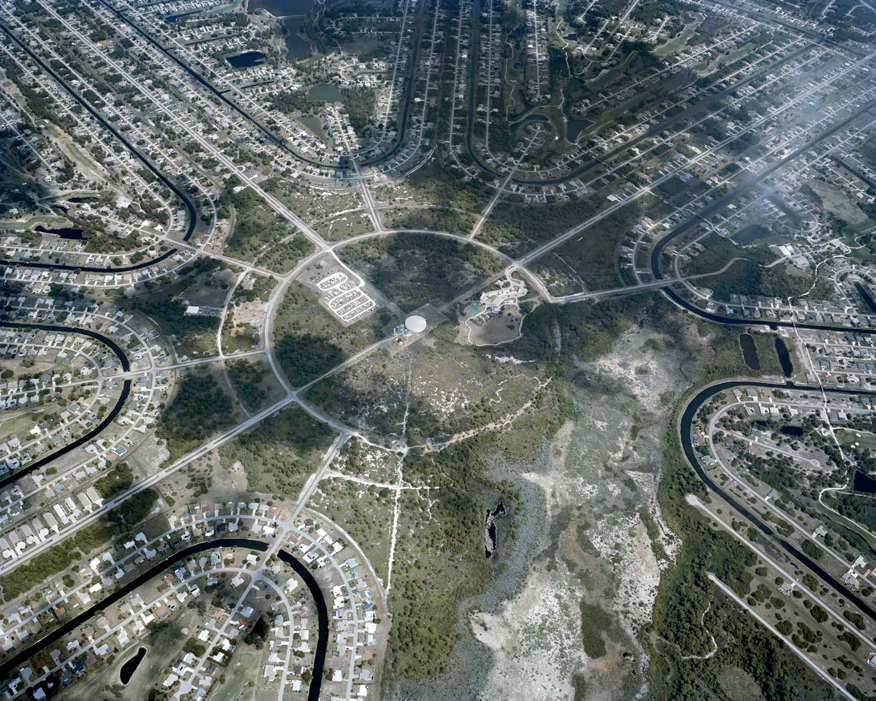 Consonant with Jean-Jacques Rousseau’s description of the citizen as “a fractional unity dependent on the denominator”, Gielen’s images present masses of cells which are systemically organized into blocks of community spaces. As a metaphor for the modern space of the individual, the cell denotes as the smallest unit to represent a controlled, contained, and standardized space. Described by John Hartle as “armour scale structures”, Gielen’s subject in “Ciphers” is centered on urban and suburban sprawl in contemporary building trends. Lacking infrastructure, the homogeneity of these habitats are effects of the ideologies which propel commercial real estate planning. Often profit-driven and badly planned, suburban sprawl is generally defined as the low-density horizontal growth from a city into rural or undeveloped areas primarily made up of isolated, car-dependent, single family homes. The residential lifestyle promoted by these suburban developments have increased greenhouse gas emissions, obesity rates, and time wasted commuting. As the percentage of the total US population living in suburbs grew from 38 percent to 50 percent between 1970 and 2000, so have many suburban developments and their problematic environmental and social effects. 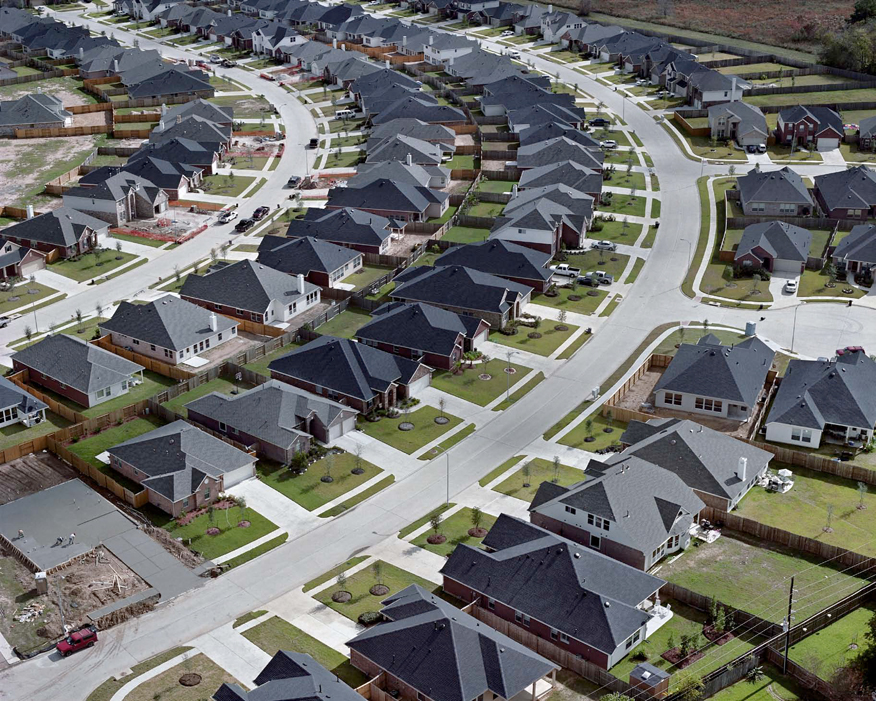 Though Gielen described these suburban neighborhoods as “absolutely self-contained” and “not changing anymore”, his images of urban development express the opposite extreme. His images of China’s new constructions depict the same blocks of cells but in a dense vertical arrangement. Like suburban sprawl, the sea of uniform mass dwellings in urban sprawl is indicative of non-integrative city planning. Stemming from fetishizing Western models of progress for bigger and faster development, China’s tremendous urban growth is a focal point for current political discourse on modernization and global economics as China may be facing the world’s largest property bubble. 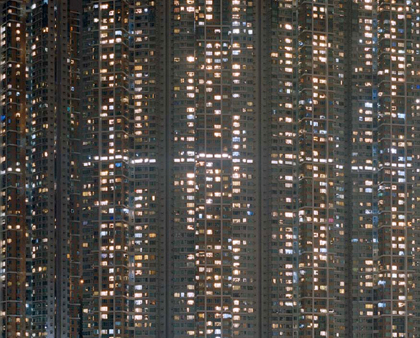 Cultural philosopher Johan Hartle writes in “Ciphers”, “In all of Gielen’s works, the world is densely populated where, as already mentioned, there is hardly space left for the unanticipated. Precisely in this sense, his images are snapshots of a global society where the issue of rational orientation is the burning question of the moment. Because the world has become small, the question of its meaningful design urgently needs to be answered everywhere.” As a critical perspective, Gielen’s photographs act as navigational tools to guide future development in awaking awareness to how these new developments will influence the way people interact, move, and are separated from one another. Ludwig Feuerbach’s statement, ” the essence of man can only be contained in the community”, reflects the notion that quality of life is not found in isolation but in our communities. The aesthetics and logics of human habitation share a close interpersonal relationship in community planning to create the world we and our children will live in. With these images, Gielen asks us to challenge and correct these problems and consider a better orientation for collective spaces.