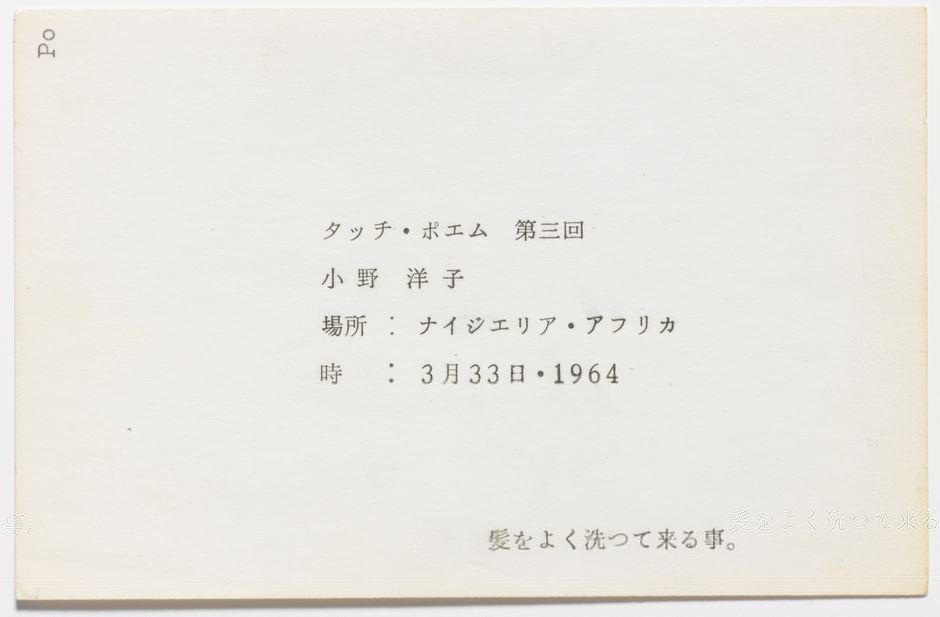 Grapefruit. Original typescript with manuscript additions in ink, in English, signed in ink ("Yoko") and with each piece dated in ink, on 151 white Japanese "Apollo" postcards (5 3/4 x 4 1/8 in.; 146 x 105 mm; 6 of the cards somewhat smaller), typescript on rectos only, except for one card with text on recto and verso, two of the smaller cards with printed Japanese text only, perforated edge at upper margins, [New York, Tokyo] 1952–1964; small piece torn away at perforated edge of introductory card, which also has small stain in text and light pencil notations at lower margin, "10 Strip-tease pieces" card with light browning at upper margin (not affecting text), very light browning at perforated edge of a few cards.  Housed in a stainless steel box.

Sales Room Announcement: The present typescript does not correspond in completeness to the 1964 limited first edition of Grapefruit.  It is, however, a draft of the work, and includes a typed and annotated card in which Ms. Ono specifies that the present draft consists of 150 event scores.  She also writes on this card, 'There are more pieces of this period that I can send you by next mail which I would like to include in the book.'

George Maciunas (given to him by Ono, typed and signed presentation inscription) 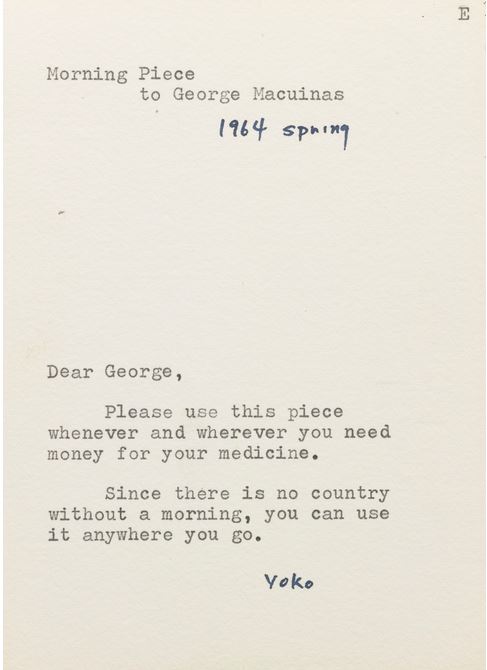 Original "event scores" which comprise a portion of the first edition of Yoko Ono's Grapefruit, a cornerstone of conceptuial and performance art.

This collection of cards, which constitute the typescript (with manuscript additions) of a portion of Grapefruit, was given by Ono to Fluxus founder George Maciunas.  One of the scores, "Morning Piece" (spring 1964) is dedicated to Maciunas.  Ono has typed a note to the dedicatee, signed in ink, on the card: "Dear George, Please use this piece whenever and wherever you need money for medicine. Since there is no country without a morning, you can use it anywhere you go.  Yoko."  Although Ono never formally joined the Fluxus movement, she was close to Maciunas, who proposed to publish her collected scores in New York in the early 1960's.  Money for the project never materialized.  Ono moved back to Japan in 1962 and established her own imprint, Wunternaum Press, for the purpose of publishing Grapefruit.  The book was released on 4 July 1964, selling for $3 to subscribers and $6 to others. The edition was limited to 500 numbered, signed copies.

The book's mysterious title comes from the fact that the grapefruit is a hybrid derived from the sweet orange and the pomelo, developed in Barbados in the 18th century.  Ono's childhood and adolescence were divided between Japan and the United States; and she came to see herself as a hybrid, a combination of Japanese and American influences.  The book itself is an exotic sour/sweet hybrid, combining literature with painting, music, and performance.  In the "Biography/Statement" issued by Ono in 1966, she writes in the chronology, "late adolescence: gave birth to a grapefruit, collected snails, clouds, garbage cans, etc."

The unusual format (single event scores, each on a separate card) "which became a crucial precursor to conceptualism, emerged from the event scores by artists attending John Cage's Experimental Music Composition classes at the New School" (fluxusfoundation.com).  Ono herself was not a pupil of Cage, but her husband at that time, Toschi Ichiyanagi, was.  On the recto of the introductory card for the set is a key to the genres of event scores or instructions found in Grapefruit: painting (40 cards), poetry (8 ), music (52), event (42), object (8).  Of the music pieces, Ono writes below the key, "After 1961 fall, many of my music pieces are meant to spread by word of mouth, therefore, do not have scores or written instructions.…If you want to know of these pieces, please ask people who already know of them."  The list of dedicatees for various pieces, found on the verso, is a who's who of the avant-garde of the early 1960's, including John Cage, David Tudor, La Monte Young, Nam June Paik, Morton Feldman, Peggy Guggenheim, Robert Rauschenberg, George Brecht, Ray Johnson, Isamu Noguchi, Diane Wakoski, as well as Maciunas and Ono, who lists herself as a dedicatee.

The idea of presenting the event scores on small cards probably came around the time George Maciunas gave Ono her first solo exhibition at his AG Gallery on Madison Avenue in 1961. For that exhibition, Ono issued oral instructions, though a few hand-written cards were displayed on the walls. These early event scores were writen on invitation cards found lying around the gallery.  Ono had been creating and  collecting her event scores since at least 1952.  While many were conceived in New York throught the 1950's and early 60's, a number were written during her two-year stay in Japan, leading up to the publication of the book.  Some pieces were created during a stay in a Japanese sanitorium following the break-up of her first marriage.

The precursors of Grapefruit and the tremendous power it continues to exert are  subjects of lively discussion for artists and art historians.  Ono herself has cited collage, assemblage, and happenings as influences on her art.  Certainly the spirits of Marcel Duchamp, Tristan Tzara, and others Dadaists and Surrealists paved the way for these event pieces.  The influences of colleagues and friends such as John Cage, La Monte Young, Maciunas, and others is also evident.  It is interesting to note that Rauchenberg's Erased de Kooning Drawing was produced in 1953.  Nine years later Ono created "Painting to Be Worn": "Cut out jackets or dress from acquired / paintngs, such as Da Vinci, Raphael, / De Kooning. You may wear the painted / side in or out. / You may make underwears with them as well."  Ono, Rauschenberg, and their contemporaries, produced these works during the era of "the dematerialization of art," to use Lucy R. Lippard's phrase. Both Ono and La Monte Young published collections of their event scores in the early 1960's. These scores marked a radical departure from earlier performance art in that "[t]heir event scores or instruction pieces could be performed in the mind as a thought … or as a live performance before an invited audience" (Alexandra Munroe, in Pfeiffer and Hollein).  Artist and curator Jon Hendriks remarked on the far-ranging possibilities opened up to artists and and non-artists alike: "Yoko Ono's idea of license, the setting up of a situation where others could complete a work of art instead of the artist, was a radical departure from the existing concept of the role of the artist."

The influence of Grapefruit on other artists has been far-reaching.  It "can be regarded not only as a seminal Fluxus work and Yoko Ono's magnum opus, but also as the crown jewel of Conceptualism—and accordingly, on a broader level, a paragon of Postwar contemporary art" (fluxusfoundation.com).  In 1989 David Bourdon remarked, "Yoko has a lyrical, poetic dimension that sets her apart from the other conceptual artists.  Her approach to art was only made acceptable when white men like Joseph Kosuth and Lawrence Weiner came in and did virtually the same things as Yoko, but made them respectable and collectable" (quoted in Taylor). This opinion was seconded in 2013 when David Ulin wrote, "Grapefruit remains among the unsung artworks of the 1960s, an encapsulation of Ono's aesthetic in the form of aphorisms." Last year Stockholm's Moderna Museet held an exhibition celebrating Grapefruit.  Curators commissioned contemporary artists to interpret and perform pieces from the book in the museum.  Another important exhibition, Half-a-Wind Show: A Retrospective, is currently touring museums in Germany, Denmark, Austria, and Spain.

In Reaching Out with No Hands: Reconsidering Yoko Ono  (2013), Lisa Carver writes, "Yoko Ono wrote, 'Burn this book,' in her first published book, Grapefruit, 1964, six years before Abbie Hoffman wrote Steal This Book.  Previously, book burning was a negative, about supression.  Think Ray Bradbury's Fahrenheit 451.… Yoko loves creation, but not so much preservation.  She loves too, destruction for what it opens up.  As when she called herself a nigger, she turned the fire into a cleansing.  When the old, sturdy trees are razed, the tender seedlings get some sun.  Read this book.  Burn your life."

Grapefruit's life-changing influence on Ono's husband John Lennon is fairly well known.  When Lennon released his albumImagine in 1971, Ono's "Cloud Piece," which directly influenced the title track, was reproduced on the back of the album cover.  The piece, written in the spring of 1963, some years before the couple met, reads in full: "Imagine the clouds dripping. / Dig a hole in your garden to / put them in."  At the time, the song was credited to Lennon alone.  Later he remarked that "Imagine" "should be credited as a Lennon/Ono song.  A lot of the lyric and the concept came from Yoko, but in those days I was a bit more selfish, a bit more macho, and I sort of omitted her contribution, but it was right out of Grapefruit."  Ono sent Lennon a copy of Grapefruit shortly after they first met and its texts radically altered his art. At the time of an Ono exhibition at the Whitney Museum in New York in 1989, cellist and performance artist Charlotte Moorman remarked, "The Beatles were fantastic.  They left their mark. But a hundred years from now, it's Yoko Ono the world's going to remember, and not John Lennon or the Beatles" (quoted in Taylor).

In an eightieth-birthday tribute to Ono earlier this year, David L. Ulin, book critic for the Los Angeles Times wrote, "Somewhere between Zen poetry and a series of instructions for living, Grapefruit is literature as conceptual art, a sheaf of 'event scores' that suggest how to turn daily life into something more engaged.…I've loved Grapefruit  from the moment I laid eyes on it, loved its sense of whimsy, its sense of play.  The instructions range from inspirational ('A dream you dream alone may be a dream, but a dream two people dream together is a reality') to the prosaic ('Step in all the puddles in the city') to the surreal.…The work … reads like haiku, or even tweets. (There's a reason Ono is currently a Twitter star).  What all this has to offer is a way of thinking, of being conscious in the world.  The universe is a place of wonder, Ono means to tell us, but we must remind ourselves to look.  This is the key to creativity, to being present, which Grapefruit insists, begins with every one of us."

After its initial limited publication in 1964, Grapefruit was issued in an expanded edition in 1970, with an introduction by John Lennon, which reads in full, "Hi! My name is John Lennon / I'd like you to meet Yoko Ono."  Since that time, the book has remained in print in a number of languages.  A sequel, to be titled Grapefruit II, was announced for release in 1966, but never published.  Earlier this year, a sequel titled Acorn was released to much acclaim.

In 2009 this set of Grapefruit event cards was exhibited at the Stendahl Gallery in Chelsea, the only time the cards have ever been shown together.  For the exhibition, the cards were  displayed in six rows of twenty-five cards each, forming an impressive grid. 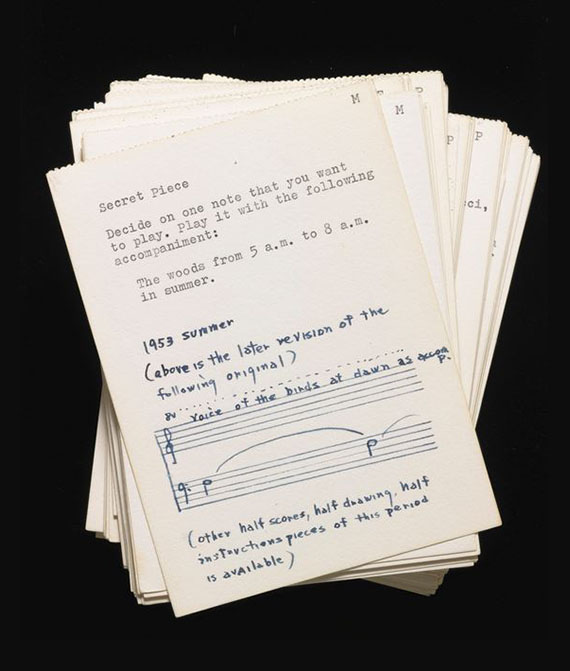 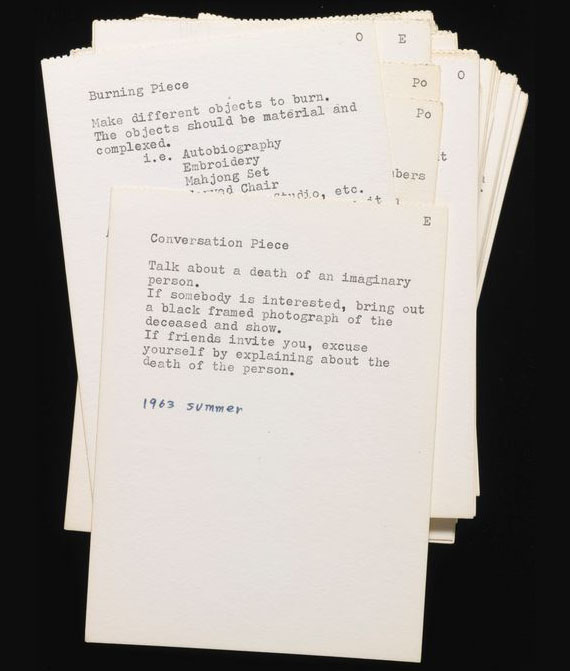 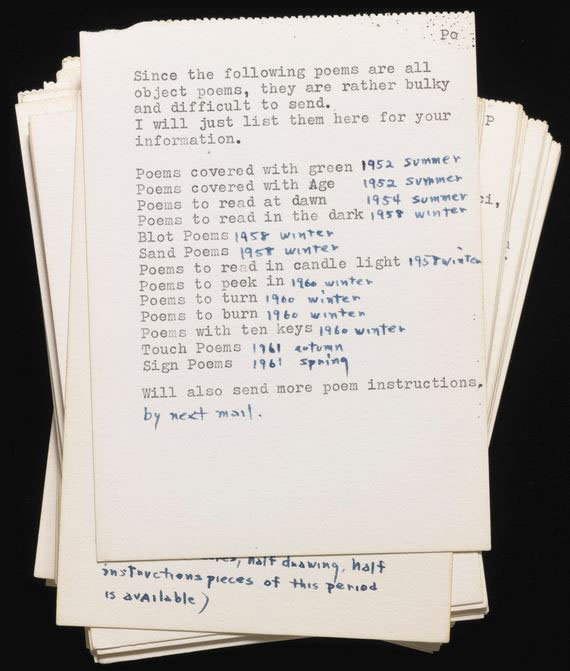 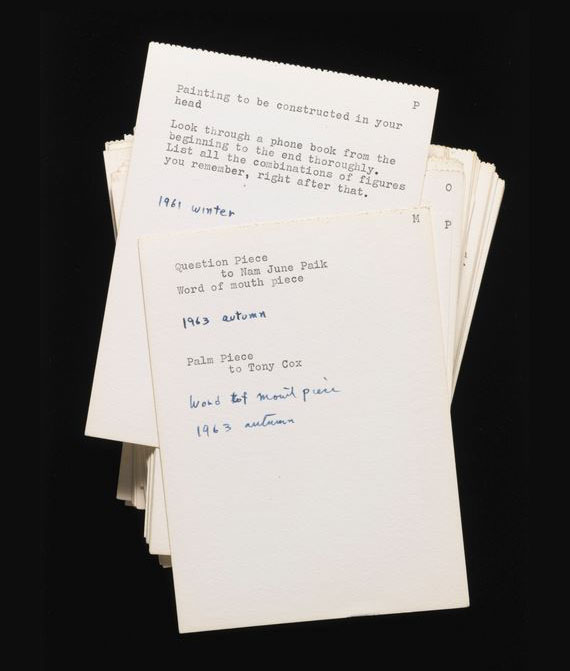