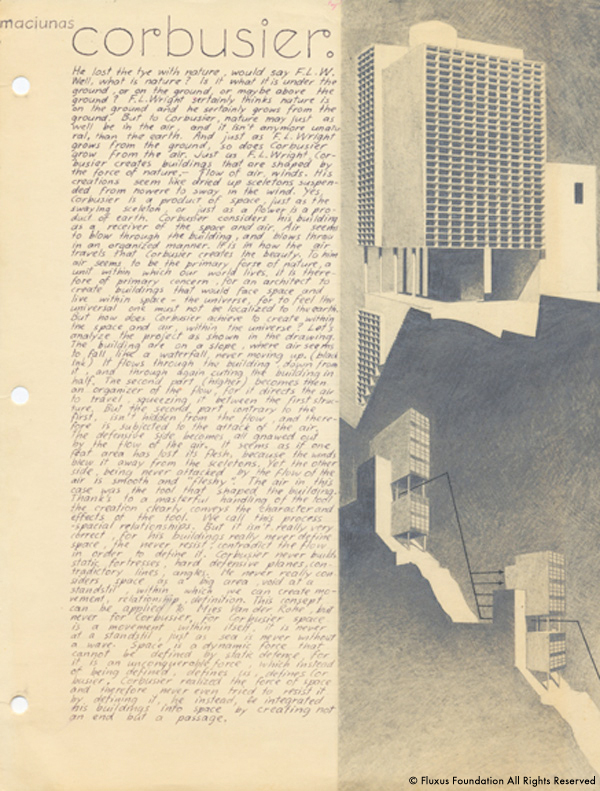 He lost the tie with nature, would say F.L.W. Well, what is nature? Is it what it is under the ground, or on the ground, or maybe above the ground? F. L. Wright certainly thinks nature is on the ground and he certainly grows from the ground. But to Corbusier, nature may just as well be in the air, and it isn’t anymore unnatural, than the earth. And just as F. L. Wright, Corbusier creates buildings that are shaped by the force of nature,- flow of air, winds. His creations seem like dried up skeletons suspended from nowhere to sway in the wind. Yes, Corbusier is a product of space, just as the swaying skeleton, or just as a flower is a product of earth. Corbusier considers his building as a receiver of the space and air. Air seems to blow through the building, and blows through in an organized manner. It is in how the air travels that Corbusier creates the beauty. To him air seems to be the primary force of nature, a unit in which our world lives, it is therefore of primary concern, for an architect to create buildings that would face space and live within space- the universe, for to feel the universal, one must not be localized to the earth. But how does Corbusier achieve to create within the space and air, within the universe?

Let’s analyze the project as shown in the drawing. The buildings are on a slope, where air seems to fall like a waterfall, never moving up. (black ink) It flows through the building, down from it, and through again cutting the building in half. The second part (higher) becomes then and organizer of the flow, for it directs the air to travel, squeezing it between the first structure. But the second part contrary to the first, isn’t hidden from the flow, and therefore is subjected to the attack of the air, the defensive side becomes all gnawed out by the flow of the air. It seems as if one flat area has lost its flesh, because the winds blew it away from the skeletons, yet the other side, being never attacked by the flow of the air is smooth and “fleshy”. The air in this case was the tool that shaped the building. Thanks to the masterful handling of the tool the creation clearly conveys the character and effects of the tool. We call this process –spatial relationships. But it isn’t really very correct, for his buildings never really define space the never resist, contradict the flow in order to define it. Corbusier never builds static fortresses, hard defensive planes, considers space as a big area, void at a standstill, within which we can create movement, relationship, definition. This concept can be applied to Mies Van der Rohe, but never for Corbusier.

For Corbusier space is a movement within itself, it is never at a standstill, just as sea is never without a wave. Space is a dynamic force that cannot be defined by static defense, for it is an unconquerable force, which instead of being defined, defines us, defines Corbusier. Corbusier realized the force of space and therefore never even tried to resist it by defining it, he instead, integrated his buildings into space by creating not an end but a passage.