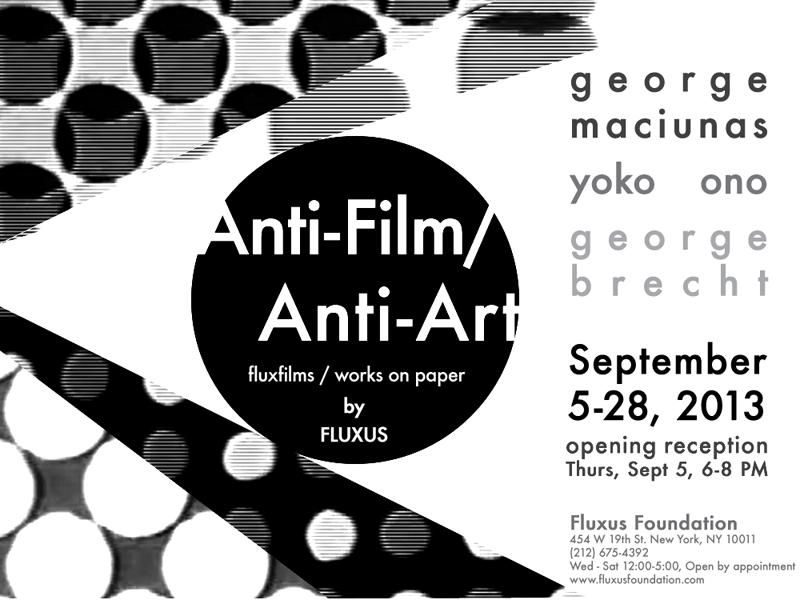 “Promote living art, anti-art, promote NON-ART REALITY,” declares Fluxus founder and central organizer George Maciunas, in his 1963 Manifesto. The document, which combines handwritten notes with collaged dictionary entries for the word flux, lays out the objectives of Fluxus, emphasizing purging the world of “dead art, imitation, artificial art” and calling for “a revolutionary flood and tide in art.” In other words, Maciunas opposed the commercial landscape of art—and, like his Dada contemporaries before him, sought to incite a true anti-art movement.

Also on display are Yoko Ono’s DO IT YOURSELF FLUXFEST—a calendar of Fluxus events illustrated by Ono in 1965, George Brecht’s event scores, and excerpts from An Anthology, one of Fluxus’s earliest publications. Like the anti-films, George Maciunas performed instrumental roles in these works, as either a designer, initiator, or editor. Indeed, each work on display is a reflection of not only Fluxus, but of the genius and humor of George Maciunas. Without him, Anti-Film / Anti-Art would never have come to be.